To accompany the paper I gave at the International Conference on the Fantastic in the Arts, I handed out a list of quotations from various fairy tales that demonstrate the various stages of the Fairytale Heroine’s Journey. Here are those quotations, as well as a list of fairy tales that fit the Fairytale Heroine’s Journey model.

The tales that feature a fairytale heroine’s journey:

The steps of the fairytale heroine’s journey as they appear in the tales:

Meanwhile, the fairies could be heard presenting their gifts to the princess. The youngest declared, “She will be the most beautiful person in the world.” The next added, “She will have the disposition of an angel.” The third decreed, “Her every movement will be marked by gracefulness.” The fourth, “She will dance beyond compare.” The fifth, “She will sing like a nightingale.” The sixth, “She will play every instrument with consummate skill.” — Perrault, “The Sleeping Beauty in the Wood.”

So the old queen packet up a great many precious items and ornaments and goblets and jewels, all made with silver and gold. Indeed, she gave her everything that suited a royal dowery, for she loved her child with all her heart. . . . Then she placed a white handkerchief underneath her finger, let three drops of blood fall on it, and gave it to her daughter. — Grimm, “The Goose Girl”

Step 2: The heroine leaves or loses her home.

When the king’s daughter saw that there was no hope whatsoever of changing her father’s inclinations, she decided to run away. That night, while everyone was asleep, she got up and took three of her precious possessions: a golden ring, a tiny gold spinning wheel, and a little golden reel. She packed the dresses of the sun, the moon, and the stars into a nutshell, put on the cloak of all kinds of fur, and blackened her face and hands with soot. Then she commended herself to God and departed. — Grimm, “All Fur”

She slept on the top floor of the house in the attic on a pathetic straw mattress, while her sisters had bedrooms with parquet floors, the most fashionable style of bed, and mirrors in which they could look at themselves from head to toe. — Perrault, “Cinderella”

The poor child was left alone in the vast forest. She was so frightened that she just stared at all the leaves on the trees and had no idea what to do next. She started running and raced over sharp stones and through thornbushes. Wild beasts darted near her at times, but they did her no harm. She ran as fast as her legs could carry her. When night fell, she saw a little cottage and went inside. — Grimm, “Snow White”

So the next morning, when she woke up, both the Prince and castle were gone, and then she lay on a little green patch, in the midst of a gloomy thick wood, and by her side lay the same bundle of rags she had brought with her from her old home. — Asbjørnsen and Moe, “East o’ the Sun and West o’ the Moon”

Cinderella thanked him, went to her mother’s grave, and planted a hazel sprig on it. She cried so hard that her tears fell to the ground and watered it. It grew and became a beautiful tree. — Grimm, “Aschenputtel”

The stepmother moved to another house near the edge of the deep forest. In the glade of that forest was a hut, and in the hut lived Baba Yaga. She never allowed anyone to come near her and ate human beings just as if they were chickens. The merchant’s wife hated Vasilisa so much that, at the new house, she would send her stepdaughter into the woods for one thing and another. — Afanas’ev, “Vasilisa the Fair”

Since he now feared that the stepmother might not treat them well and might even harm them, he brought them to a solitary castle in the middle of a forest. It lay so well concealed and the way to it was so hard to find that he himself would not have found it if a wise woman had not give him a ball of yarn with magic powers. — Grimm, “Six Swans”

The bird tossed down a dress more splendid and radiant than anything she had ever had, and the slippers were covered with gold. — Grimm, “Aschenputtel”

The dwarfs told her: “If you will keep house for us, cook, make the beds, wash, sew, knit, and keep everything neat and tidy, then you can stay with us, and we’ll give you everything you need.” — Grimm, “Snow White”

How did this all come about? Things would have been different without the doll. Without her aid the girl could never have managed all the work. — Afanas’ev, “Vasilisa the Fair”

Step 6: The heroine learns to work.

She left the hut, went into the middle of the forest, climbed a tree, and spent the night there. The next morning she got down, gathered asters, and began to sew. She could not talk to anyone, nor did she have a desire to laugh: she just sat there and concentrated on her work. — Grimm, “The Six Swans”

“Stay with me, and if you do all the housework properly, everything will turn out well for you. Only you must make my bed nicely and carefully and give it a good shaking so the feathers fly. Then it will snow on earth, for I am Mother Holle.” — Grimm, “Mother Holle”

Since she had never seen a distaff or a spindle and was greatly pleased by all that winding, she became so curious that she had the woman come up and, taking the distaff in her hand, she began to draw the thread. But then, by accident, a little piece of flax got under her fingernail and she fell dead to the ground. — Basile, “Sun, Moon, and Talia”

Snow White felt a craving for the beautiful apple, and when she saw that the peasant woman was eating it, she could no longer resist She put her hand out the window and took the poisoned half. But no sooner had she taken a bite when she fell down on the ground dead. — Grimm, “Snow White”

Vasilisa was the fairest girl in the village, and her stepmother and stepsisters were jealous of her beauty. They tormented her by giving her all kinds of work to do, hoping that she would grow bony from toil and weatherbeaten from exposure to the wind and the sun. And indeed, her life was miserable.” — Afanas’ev, “Vasilisa the Fair”

“No,” the woman said. “That is–there’s only one way in the entire world, but it’s so hard, you won’t be able to free them. You see, you would have to remain silent for seven years and neither speak nor laugh. If you utter but a single word and there is just an hour to go in the seven years, everything will be in vain, and your brothers will be killed by that one word.” — Grimm, “The Twelve Brothers”

Step 8: The heroine dies or is in disguise. (Sometimes this is the true partner.)

No sooner had she touched the spindle than she pricked her hand with its point and fainted. . . . Nothing could revive her. — Grimm, “Briar Rose”

“The hide of the donkey will be the perfect disguise to make you unrecognizable. Conceal yourself carefully under that skin. It is so hideous that no one will ever believe it covers anything beautiful.”
— Perrault, “Donkeyskin”

All that was in the room was gold or silver; but when she had gone to bed, and put out the light, a man came and laid himself alongside her. That was the White Bear, who threw off his beast shape at night; but she had never seen him, for he always came after she had put out the light, and before the day dawned he was up and off again. — Asbjørnsen and Moe, “East o’ the Sun and West o’ the Moon”

Step 9: The heroine is revived or recognized. (Sometimes she must do this to the true partner.)

She sat down on a stool, took her foot out of the heavy wooden shoe, and put it into the slipper. It fit perfectly. And when she stood up and the prince looked her straight in the face, he recognized the beautiful girl with whom he had danced and exclaimed: “She is the true bride.” — Grimm, “Aschenputtel”

The king could no longer restrain himself. He sprang forward and said, “You can be no one else but my dear wife!”

At that very moment life was restored to her by the grace of God. — Grimm, “Brother and Sister”

How great was her surprise when she discovered that Beast had disappeared and that a young prince more beautiful than the day was bright was lying at her feet, thanking her for having broken the magic spell. — de Beaumont, “Beauty and the Beast”

No sooner had her precious tears fallen on the prince’s eyes than he regained his full vision. Now he could see just as clearly as he had seen before, and all this was due to the tenderness of the impassioned Persinette, who took him into her arms. He responded with endless hugs, more than he had ever given her before. — de la Force, “Persinette”

The king’s son, who was returning from a hunt, encountered her, and observing how beautiful she was, he asked her what she was doing there all alone and what had caused her to weep. . . . She told him the entire story, and the king’s son fell in love with her. — Perrault, “The Fairies”

When the sentence had been carried out, the young king married his true bride, and they both reigned over their kingdom in peace and bliss. — Grimm, “The Goose Girl”

When the king saw this, he ran and took Zezolla in his arms and led her to sit on the throne beneath the canopy, where he put the crown on her head and ordered everyone to bow and curtsey to her as their queen. — Basile, “The Cat Cinderella”

The fairy waved her wand, and everyone there was transported to the great hall of the prince’s realm, where the subjects were overjoyed to see him. The prince married Beauty, who lived with him for a long time in perfect happiness, for their marriage was founded on virtue. — de Beaumont, “Beauty and the Beast”

Step 12: The heroine’s tormentors are punished.

“The ogress, enraged at the sight of the king, flung herself headfirst into the vat and was devoured by the repulsive reptiles she had ordered put in there.” — Perrault, “The Sleeping Beauty in the Wood.”

“She deserves nothing better,” said the false bride, “than to be stripped completely naked and put inside a barrel studded with sharp nails. Then two white horses should be harnessed to the barrel and made to drag her through the streets until she’s dead.”

“You’re the woman,” said the king, “and you’ve pronounced your own sentence. All this shall happen to you.” — Grimm, “The Goose Girl”

When the couple went to church, the elder sister was on the right, the younger on the left side: the doves pecked one eye from each one. Later, when they left the church, the elder sister was on the left, the younger on the right. The doves pecked the other eye from each one. And so they were punished for their wickedness and malice with blindness for the rest of their lives. — Grimm, “Aschenputtel”

Sources for these tales: 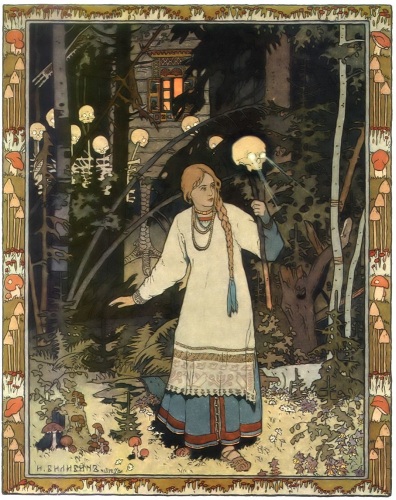 (This information accompanied a paper originally given at the International Conference for the Fantastic in the Arts 38, in March, 2017. The image is an illustration for “Vasilisa the Fair” by Ivan Bilibin.)